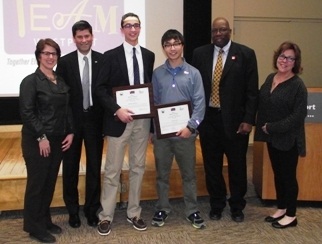 Two students have won TEAM Westport’s 2015 Teen Diversity Essay Contest co-partnered with the Westport Library and sponsored by Sachs Walsh insurance. The contest was open to all high school students who are residents of Westport or attend school in the town. The winning essays may be downloaded at the links below.

Jacob Klegar, a Westport resident and junior at Choate Rosemary Hall School, has won first prize in the contest. His essay entitled ”Friendship Through a Shared Love of Tennis [PDF]” explores the premise that the key to breaking down “self-segregation” in the cafeteria is for schools to put “a greater emphasis on clubs, sports, and other extracurricular activities and encouraging others to get involved with their passions” in an environment in which “interracial friendships are encouraged and valued at least as much as intraracial ones”. He mentions pragmatic lessons which could be learned from Choate’s “progress in fostering diversity” by “American schools more generally …including Westport, which is over 90 percent Caucasian”. After acknowledging that “boarding schools” like Choate “have the luxury” of “admitting a diverse student body” , he challenges them to take on the “deeper, tougher issues that remain” and makes suggestions for their doing so. Ultimately, for boarding schools, he states that success should not be measured by “ the admissions department” enrolling “a multicultural freshman class, but when, sophomore year, a Chinese National and black student from Nigeria decide to room together [as] best friends through a shared love of tennis”. Jacob’s prize was $1,000.

The second prize winner is Brendan Massoud, a sophomore at Staples High School. His essay, entitled “Eat and Meet [PDF]”, frames the cafeteria issue by positing, “…people are comfortable with people who are easy to identify as being similar” and there is a“…common perception that people of our same race act and communicate the same way we do”. “...So while the cafeteria should be a place where students …feel comfortable familiarizing themselves with others from varying backgrounds and with different experiences and viewpoints, it instead becomes a place of self-division based on those very differences.” Brendan uses personal examples to demonstrate why this might happen and how one might move beyond such “self-division”. He, then, offers a “very plausible school-wide solution [for Staples] that would familiarize people with each other” based upon grouping students “one day a week” by “the period and class during which lunch takes place”. Overall, he states , “I see it as crucial that Staples students become more familiar with the different races, ethnicities, sexual orientations, and interests that span the student body, in order to increase friendliness and interaction among them, to maximize the value of the Staples education, and to make Staples graduates more productive members of society.” Brendan’s prize was $750.

The prize winners read their essays on Monday, April 6, at the Awards Ceremony in the Westport Library's McManus Room. Avi Kaner, Westport’s second selectman; Maxine Bleiweiss, Executive Director of the Westport Library; and Teri Walsh, President of contest sponsor sachs Walsh Insurance were present to honor the winners. Harold Bailey, TEAM Westport’s Chair, presented the prizes.
The topic for this second essay contest is based on the reality that the school cafeteria is often a setting in which students self-segregate. The guidelines for entrants say, “Please reflect on the barriers that prevent students from reaching out to others who are different from themselves, particularly those who are of a different race, ethnicity, and/or sexual orientation.”

Co-partnered by TEAM Westport and the Westport Library, the contest asked teens to reflect on the barriers that prevent students from reaching out to others who are different from themselves, particularly those who are of a different race, ethnicity, and/or sexual orientation. Specifically the contest asked students to “describe those barriers, and identify specific steps you and other students in your high school can take to help students break down those barriers—especially in the cafeteria. Indicate what you believe are the risks and benefits of making that effort.”

Bailey, TEAM Westport’s chair since its founding in 2004, says, “ Initiatives such as this essay contest are key vehicles for enabling Westport students to focus on key issues of diversity in the world surrounding Westport. This year’s Essay Topic – ‘The Cafeteria Challenge’ -was a very demanding one. While the school cafeteria is the most obvious place to meet new people from backgrounds and social groups outside a student’s own, it is also the place most fraught with personal vulnerability for doing so. Framing such a level of complexity while offering pragmatic remedies to resolve it in 1,000 words or less of high caliber writing is a very tall order. We applaud the insight, skill and courage of the award winners.”

TEAM Westport has developed a unique role in the community. By partnering with municipal, government and community institutions it draws attention to issues around multiculturalism and diversity, making the invisible, visible. Examples include co-sponsoring diversity focused programming with The Westport Library, working with Westport Schools and its Board of Education on diversity, assisting in diversity recruiting and training with the town’s police and fire departments, scheduling “talk-back” sessions on issues raised by performances at the Westport Country Playhouse and participating in initiatives with the community’s Interfaith Council.

Free viewers are required for some of the attached documents.
They can be downloaded by clicking on the icons below.