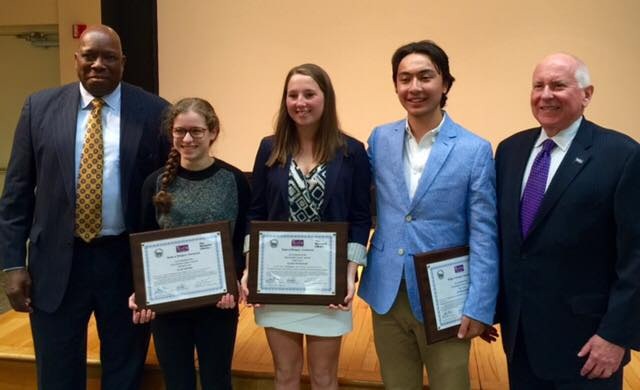 Three students—one each from Choate Rosemary Hall, Staples High School, and Green Farms Academy—have won TEAM Westport’s Teen Diversity Essay Contest, which is co-sponsored with the Westport Library. The annual contest is open to high school students who reside in Westport or who attend school in Westport. In light of the many recent demonstrations in cities and on college campuses, this year’s contest asked students to consider the state of race relations in our country, “both the nature of the problem and the appropriate way to address divisions and inequities in our society.”

First prize winner for the second year in a row is Jacob Klegar, now a senior at Choate Rosemary Hall. In his essay “The Black Lives Matter Movement: Past, Present, and Future” Jacob advocated focusing on our nation’s youth, particularly on putting them in “actual diverse environments from a young age.” He noted that “one of the biggest obstacles to solving our America’s race problem is the segregation of black and white communities…” Jacob also advocated promoting open dialogue among high school and college students as a way to help students understand each other’s opinions—provided all opinions were welcome and listened to. Jacob’s prize is $1,000.

Second prize winner is Ellie Shapiro, a student at Staples high School. Elli’s essay, "Coming to Terms with Race in America" is a personal reflection on her own journey as she has faced the privileges afforded her as a white person living in an affluent community, struggled to understand the realities of African American lives, and continually works to acknowledge and combat her own racism. Ellie’s prize is $750.

Third prize winner is Ali Tritschler, a student at Greens Farms Academy. She, too, described her personal journey toward understanding her own position of privilege, the discrimination experienced by African Americans, and the causes of the many demonstrations that have occurred recently protesting police actions as well other forms of discrimination. Her essay is "Awareness". Ali’s prize is $500.

The prize winners read their essays on Monday, May 16, at the Awards Ceremony in the Westport Library McManus room. Jim Marpe, Westport’s First Selectman, and William Harmer, Director of the Westport Library, were present to honor the winners. Harold Bailey, TEAM Westport’s Chair since its founding in 2004, presented the prizes.

Bailey says, “ TEAM Westport and the Library co-sponsor this annual contest in order to help focus Westport teenagers on the challenges facing our increasingly diverse society and to encourage them to think seriously about their own potential role in making our society both welcome and value the diversity of its citizens.”

Additional photos of the awards event may be seen at the Team Westport Facebook Page.