One of the first marine searches on Long Island Sound by members of the Westport Police Department occurred back in February 1933 when several members of the Department boarded the fishing boat Saugatuck (captained by Westporter John Mulhaley) searching for a missing youth.

After a harrowing 48 hours on a disabled vessel, in heavy seas and in bitterly cold weather (and well after the missing youth was found alive and well on Cockenoe Island by other searchers!), the search party aboard the Saugatuck was located by an airplane occupied by Officer Salvatore Fratino and brought safely to shore. 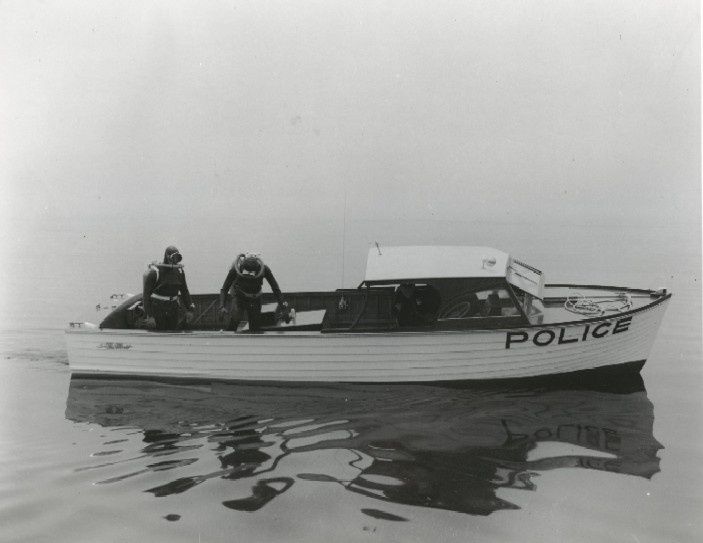 Currently the Westport Police Marine Division operates two boats from 15 feet to 25 feet. Approximately 25 officers are currently qualified to work on the police boats, and two officers are assigned to the Marine Division full-time from Memorial Day weekend through Labor Day weekend. These officers patrol Long Island Sound and the Saugatuck River, enforcing marine laws, shellfish regulations, and conducting safety inspections on hundreds of pleasure craft each season. In 2013 a jet ski was added to the Marine Division and is used for shellfish enforcement and special events.

Normally Marine One, pictured above, is kept in the water 365 days a year in mission-ready shape and can be en route to any marine-related emergency within minutes. This boat, a 27' Boston Whaler, was decommissioned in 2012 and a replacement is currently being built by Naiad Inflatables of Newport, R.I. with a delivery date of early September 2014.

Free viewers are required for some of the attached documents.
They can be downloaded by clicking on the icons below.